Proof of full vaccination is required to access the monument for anyone older than 16 years old. The presentation of a health pass is mandatory for young people aged 12 to 15 years old.

Find out more information about your visit here.

History of the monument

The cathedral sits atop the vast basalt outcrop, above the city of Le Puy-en-Velay. The rock, known as “Mont Anis”, has been occupied since the Gallo-Roman era. It became a place of worship to the Virgin Mary in the 4th century, and was the bishop’s seat in the 7th century. 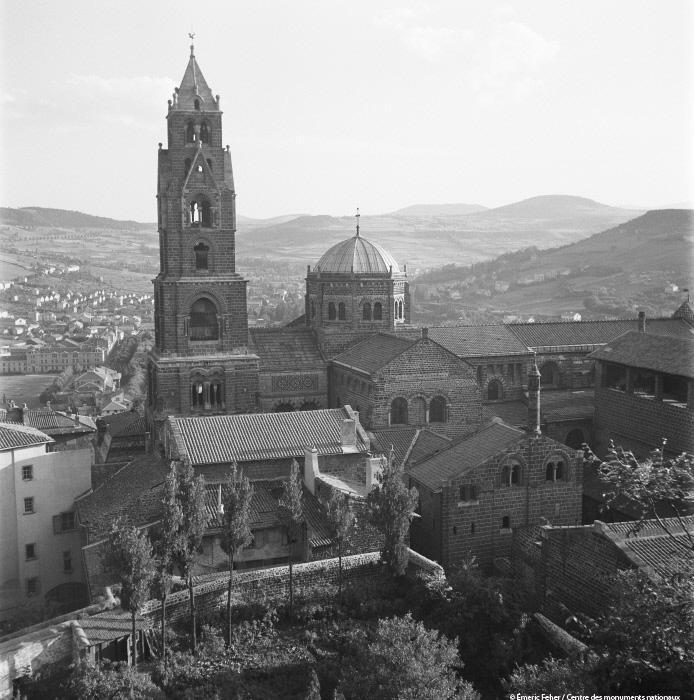 The city’s reputation was cemented in the late 10th century, with a statue dedicated to the Virgin Mary Our Lady of Le Puy. Pilgrims from countries neighbouring France gathered here on their way to Santiago de Compostela.

The church was expanded in the 11th and 12th centuries, to cope with an ever-growing number of pilgrims. It was during this period that the cloisters were added. The cloisters were intended for the church’s secular clergy, who formed the bishop’s council.

The cloisters underwent a series of renovation works between the 15th and 18th centuries. Architect Mallay conducted a programme of major works between 1842 and 1853, including the dismantling, rebuilding and restoration of the Romanesque décor. This work was continued by Mimey until the start of the 20th century, retaining the original spirit of the architecture.

When navigating on the portal site www.monuments-nationaux and the associated monument sites (list), cookies are stored on your computer, mobile or tablet.